Here are some examples of simulations and visualizations of vibrating systems made with Blender and programmed with Python. Burster plugin makes it interactive.

A simulation of coupled pendulums made with Blender. Mathematical model was linearized and programmed with Python language using symplectic Euler-Cromer algorithm to solve equations of motion. User interface makes it possible to start or stop simulation and to select one of three initial conditions (prepared to show vibration modes and beat vibration). This is a screen capture from online visualization that you can run online at: geta3d.com (need to install Burster plugin stable version 1.5.5 - download page)

Coupled pendulums from MyInventions on Vimeo.


Here is a simulation of inverted pendulum with PID controller made with Blender. This is not engineering simulation because of using of game engine. That is a screen capture from online visualization that you can run at: geta3d.com


You can run online simulation of two coupled pendulums and control one of them with keyboard at: geta3d.com 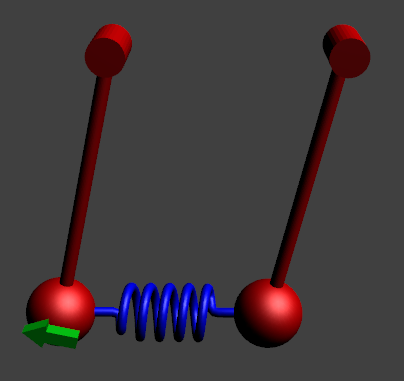 
A simple simulation of a pendulum programmed with Python with Matplotlib library. You can see a phase plane and energy charts (kinetic, potential and total). The Symplectic Forward Euler Method was used. Two examples are presented: without damping and with damping.


Pendulum simulation from MyInventions on Vimeo.